June 27, 2016
In today's society the auction industry has transformed dramatically over the past 2,000 years. Yes, you read that correctly...

Records handed down from ancient Greeks document auctions occurring as far back as 500 B.C. At this time, women were auctioned off as wives. In Rome, around the time of Christ, auctions were popular for family estates and the selling of war plunder. One of the most significant historical auctions occurred in 193 A.D. when the Praetorian Guard put the entire Roman Empire on the auction block.
American auctions date back to the arrival of the Pilgrims on America’s eastern shores in the 1600's and continued in popularity during colonization with the sale of crops, imports, livestock, tools, slaves and entire farms. Colonels during the American Civil War were the only people allowed to auction war plunder and today many auctioneers carry the title of “Colonel.” Auction schools came to the United States in the early 1900's. The Great Depression created many opportunities for auctioneers, as their services were needed to liquidate the assets of individuals and businesses hurt by the economy. reference: http://www.auctioneers.org/consumers/auction-history

In some parts of England during the seventeenth and eighteenth centuries auction by candle began to be used for the sale of goods and leaseholds. In a candle auction, the end of the auction was signaled by the expiration of a candle flame, which was intended to ensure that no one could know exactly when the auction would end and make a last-second bid. Sometimes, other unpredictable processes, such as a footrace, were used in place of the expiration of a candle. This type of auction was first mentioned in 1641 in the records of the House of Lords. The practice rapidly became popular, and in 1660 Samuel Pepys's diary recorded two occasions when the Admiralty sold surplus ships "by an inch of candle". Pepys also relates a hint from a highly successful bidder, who had observed that, just before expiring, a candle-wick always flares up slightly: on seeing this, he would shout his final - and winning - bid. The London Gazette began reporting on the auctioning of artwork at the coffeehouses and taverns of London in the late 17th century. reference: https://en.wikipedia.org/wiki/Auction 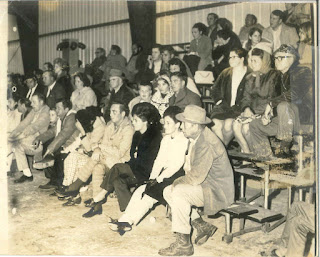 Photograph of a 1958 Henderson Auction's event.

Popular posts from this blog

Construction equipment including dozers up for grabs!

No plans this week/weekend? Our 3-Day Summer Sale is here!